For a full recap on thermistors refer back to the page on them – link.

Thermistors are a type of resistor whose resistance varies depending on the temperature. A temperature – resistance graph for an NTC thermistor looks like; 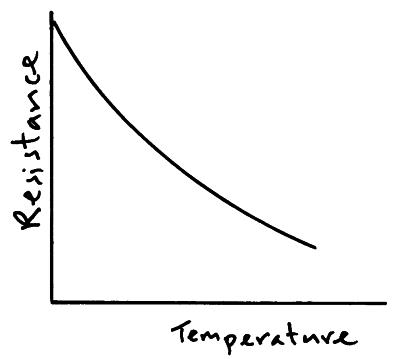 If an experiment were to be carried out such that a thermistor was kept at a constant low temperature, and varying values of p.d. and current were recorded for it. Then the same process happened but with the thermistor at a higher temperature, the following I-V graph can be obtained;

LDR’s work based on the same principle as thermistors except that instead of temperature being the variable that affects its resistance it is the amount of incident light on it. As a result the following graph shows the relation ship between increasing light intensity and resistance.

The graph shows the same relationship that a thermistor has to with resistance – only different variables to affect the outcome.

changes which results in a change in the distribution of voltages because;

In this particular setup and if the temperature of the thermistor were to increase: Temperature devices such as these can be used in a variety of applications from mobile phones and tablets to ovens and fridge freezers. Take a fridge freezer for example, if the temperature gets too hot, then the resistance of the thermistor will reach a certain value which will then result in a larger current through the fixed resistor which could cause the motor in the fridge to work harder to cool the device down.