A complete recap of Kirchhoff’s first law can be found by going to the page: 3. Kirchhoff’s 1st Law

The following equations can be written regarding the current flow;

Or from the right of the trio of resistors we could write;

Kirchhoff’s second law is also known as Kirchhoff’s voltage law (KVL) and focuses on the e.m.f. supplied to a circuit as well as the p.d.

If we take this simple circuit here;

If we supply two bulbs instead of one;

With a complete circuit, the energy per unit charge (voltage) supplied by the cell has to be distributed to the two bulbs (the distribution will depend on the resistance of each bulb – but this will be covered in more depth at a later stage). Some of the e.m.f. will supply the first bulb with a p.d. and some will provide the second bulb with a p.d. Therefore;

The electrons carry the energy and must distribute it across the two bulb. If the first bulb has more resistance, then it will use a greater amount of the p.d. in which case it may shine more brightly, and vice versa.

If we take this simple parallel circuit; 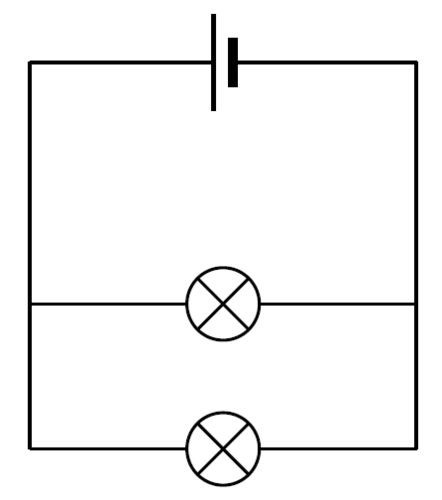 Therefore, the current divides but the voltage (or energy each electron has) stays the same.

We can therefore write;

We can therefore write that the sum of the e.m.f. of a loop is equal to the sum of the p.d.’s in that same loop – this is the conservation of energy.

It can also be written as;
Kirchhoff’s voltage law states that the sum of all voltages around any closed loop in a circuit must equal zero.

We can now use the definition of resistance to help us expand KVL equation further;

The voltage through resistor 1 is dependent on the current

and the resistance of that resistor,

This tells us that both

Further equations can be constructed by using KCL or by exchanging the e.m.f for

but this will be shown in more detail in the next section.